Why Business Insider is Wrong About Twitter and Retail

We came back from a lovely holiday with our families to an email from a reader sharing Henry Blodget’s latest article in Business Insider, “Guess What Percent Of Black Friday Online Sales Came From Twitter Referrals?” We’ll save you the read: the answer is zero. Unfortunately for those of us who make our living studying social media marketing and psychology (and trying to convince clients these platforms work when executed correctly), Facebook was no better. “Only 0.68% of Black Friday online sales came from Facebook referrals–two-thirds of one percent. That was a decline of 1% from last year,” reads Blodget’s post. So what’s the rebuttal? WHERE IS THIS STUDY FROM?
Well for one, all these figures come from the IBM Holiday Benchmark Report. That’s right. IBM. The company who hasn’t had a main role in the PC retail market since the 90s and who, after the ThinkPad laptop PC’s failed to change their retail clout, finally abandoned its role as a PC manufacturer in 2005. Perhaps not the best report to study Black Friday sales in the era of Apple, Droids and Kindles. “IBM and others are not considering actual social commerce sales – transactions through apps, directly through social sites – because they do not have access to this data, says Miranda Miller of SearchEngineWatch.com who also wrote on social commerce apps. “Until we have data from those companies, we can only see how successful social is at driving buyers in the very last stage of their buying cycle to a retailer website to complete the purchase.”

We need to take statistics from studies done by companies like Compete, who know through the findings of their extensive study on the social media platform, that Twitter users buy more online (33%) than overall Interview viewers. Thanks to reporters like Christopher Heine from AdWeek, we know the Compete report looked at 7,800 Web users, analyzing their online buying activity from Aug. 1 through Oct. 14 and the 665 retail sites were involved in the study, including Walmart, Apple, Amazon, Pottery Barn and Groupon. Now that’s a sound study to quote. WHAT WERE THEY MEASURING?
Was the study measuring click-through on discount and limited URLs for landing pages? If not, how were they tracking referrals from social networks? This is an important question of measurement that has to do with ROI, something that comes up when we deal with new client campaigns. We need to ask these questions to explain how shoppers referred from social networks such as Facebook, Twitter, LinkedIn and YouTube generated 34 percent of all online sales on Black Friday, according to Performics for Miranda Miller’s article, “Black Friday E-Commerce Sales Set $1 Billion Record, 2012 Holiday Online Sales Strong. And try telling Zappos that Twitter accounts for no retail conversions; with more than 1.5million Twitter followers, Zappos is well-known for their use of social media  tactics (they invented the Tweet Wall!) for their online ecommerce site. The 24-year CEO Tony Hsieh understands the importance of driving Internet traffic through well-placed self-linking in public conversations, one of his more famous tactics for retail conversions.

IS THE PREMISE SOUND?
Really? No single sale could be linked to discounts, coupons or marketing campaigns shared on social media? (If you’d like to set up Twitter Retail tracking for your company, you can sign up for a 30-day trial with Boomtown and learn if your current social media efforts are successful.)

HOW ARE WE TRACKING BUYING PATTERNS?
Multi-touch attribution is a scary phrase that simply helps us try to assign value (again, for ROI for paying clients) to every touch point between a consumer and the marketer before the point of purchase (or conversion) even if that value is small. So perhaps the consumer didn’t click directly on a Tweet with a discount code, but they came back the next day because of that coupon and went directly to the site and shopped a bit. Then the next day they decided to purchase something so they logged back on to the site and made a purchase. The last conversion is that site (last place they visited before the money came in to the company) but assisted conversions go all the way back to the initial impression on the consumer from Twitter. Twitter users are also more likely than the average internet user to purchase from retailers, according to the Compete study. The impact of being exposed to a retail Tweet is even more pronounced on ecommerce purchases as it is on site visitation so we know that retail Tweet exposure correlates with lead quality – users arrive with a higher propensity to buy.

“A customer may be a fan of the brand on Facebook, follow them on Twitter, participate in loyalty programs and spend more per transaction, and more often, than someone with no social connection to the brand,” says Miller. “That same person may navigate directly to the website to purchase . . . it means that [social] impact is not being measured correctly.” If you want to track campaigns, measure reach and calculate influence, you can try Hashtracking for free to get acquainted with ROI. You’ll get detailed reports from them showing who mentioned your campaign hashtag, how many people it reached and calculate the influence it had. For a full understanding of tracking goals and conversions for a marketing campaign, you should hire a company (like Boomtown!) unless you are well versed with Google Analytics and SEO. Other companies are using Facebook to get more transactions through programs like Payvment and Lish, which posts company promotions on users’ walls and lets users share purchases with other Facebook users in hopes of getting in front of a larger audience, according to Clickz.

Google Analytics’s multi-channel funnels allow you to see which campaigns, sources, or channels contributed to a visitor’s multi-visit conversion. Miller reminds us of the Slingshot SEO study where they analyzed 23 million multiple interaction conversions across 30 domains for a year; SMO is often undervalued because it is nearer the top of the funnel and functions more as a research vessel, she notes. 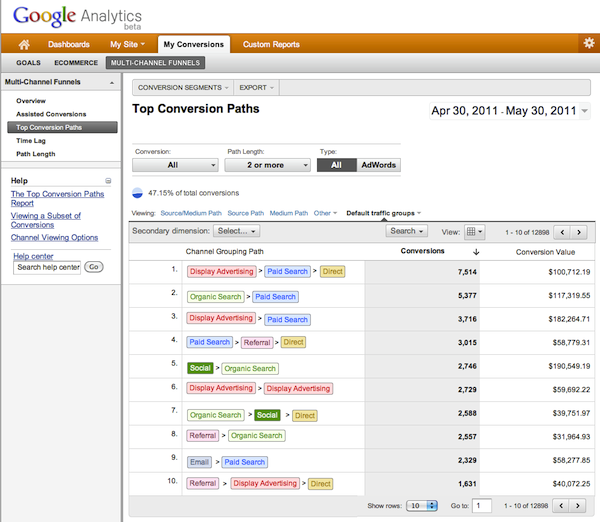 TIPS FOR INCREASING YOUR RETAIL CONVERSIONS