When Philadelphia web design clients come to us asking for advice on branding, there usually is one consistent question within our first couple encounters: Why do the big brands get all the breaks? Since becoming the super-power that it is today, there has always been a very divisive debate if Google favors big brand names. Whether it is done through Philadelphia web design, an algorithm, or done manually, there are those that feel that the big guys are helping the big guys. Regardless if these accusations are true or not, often times these types of debates get too broad and miss the base-line point. Do big brands have an advantage online? You betcha.

Any advertising field will always create a power-shift over time. It was kind-of inevitable, considering these companies already had built-in branding for their online presence. So maybe the issue isn’t about pointing out what they are doing, but figuring out how they did it and use it to your advantage. 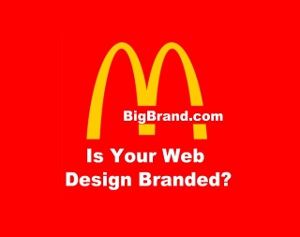 In the beginning of the world-wide-web, creating a website was similar to getting off the Mayflower. Jump onto dry land, pull out your flag, claim your domain, and set up some roots.

Granted there wasn’t much in the way of a population at first. And when it came to Philadelphia web design, you were free to make the best website ever without judgment. But then something happened: the advent of the search engines!

Search engines were the first welcome sign to the internet. It was a promise of a new land, free, and without restriction. When search engines began, life was good, considering that we pilgrims, got all these new visitors coming to our settlement. However with these new visitors came interest in laying claim to their own slice of cyberspace, and boy did they ever.

As time passed over our great land known as the internet it became clear that not only were pilgrims setting up their online property, but many started making real money through online means. Ingenuity met promise…leading to the online version of:

Boom. Intellectual property and promise, met ingenuity, and intelligence. But like the true Industrial Revolution that took shape in America the 1780s, the most poignant term that described this time would probably be forethought. The reason being, that throughout this time, big brands were still cognitively dissident of the internet. Whether they felt that they didn’t need it, or that it was a fad that never would last; the fact remained that only the brave and hungry, saw what this could be, and set out to make this new land their own.

And that’s what they did, the pilgrims cleared the land, developed a homestead, and did all the heavy lifting. While the big brands had no need to toil like a commoner. That was until the revolution. Whether it was understanding keyword algorithms or utilizing Philadelphia web design services; soon commoners were using this new dominion and these new tools, to their advantage. They began to prosper. These commoners were generating ad revenue, and began to make some noise in the stock markets. So the big brands jumped on board, and as time passed, their non-internet resources became an asset, allowing them to outspend the pilgrims. Their domains became bigger, received more attention, and curried favor with those search engines that brought all of the attention in the first place.

To pile on one more metaphor here: the cool kids always show up late to the party. They do that because they can. They find out that the party is worth going to, then show up. It’s calculated. No risk involved.

What does this have to do with Google?

Good question. While Google has made algorithm shifts in the past that some feel favor larger brand names, many feel that the alteration in SEO are affected on something a bit more organic. Many think this is just an evolutionary step for the web. That as the big brands came to the internet, and subsequently Google, soon after, Google started coming to the big brands.

By having an established brand offline, the bigger brands were able to take their following with them and funnel it towards the new medium. So over time, trends that seem to prefer brand-building have naturally found their way into the algorithm. For example ranking signals in the early days took branding influence into account very little.

So what we were left with were qualifiers that leveled the playing field a great deal. Aspects like content, page title keywords, Philadelphia web design, and (drum roll) meta tags, were the deciding ranking factors. This meant that small businesses could spend the time improving the content that was keyword-targeted. While big brands could spend more money to extend their power. Overall, it was still pretty level.

Of course, the downside was that early search engines had a lot of quality/spam problems. That all changed with the PageRank algorithm. This changed everything, as search engines relied on links more and more for ranking purposes.

By 1998, PageRank was officially launched by Google, changing the course of brand influence. Taking it from weak, to a medium ranking signal in the process.

The Beginning of Link-based Rankings

With the inclusion of link-based ranking, this change allowed big brands their first big advantage. Due to their offline branding clout, other websites naturally gravitated towards becoming linking partners, with bigger brands. They fought for the chance to associate with them. Thus the bigger brands started to collect very strong linking profiles.

Remember, PageRank was created to offset the overall declining quality of both pages and search results. The big brands advantage, was more or less just a by-product of that shift.

All of which was integrated into the beginning of social media outlets in 2009. Since these platforms were all predicated on viral followings, the bigger brands had a stranglehold on their industries offline. So once these social signals began to be integrated into the algorithms, the smaller brands didn’t stand a chance.

All is not lost however, as these social signals are all influenced directly by a brand’s overall power. Since offline advertising funnels a brand’s overall awareness, this all leads directly to activity on social media. As SMO becomes integrated into SEO more, brands have a straightforward way for their brand to influence SEO. So how do you make this work for you?

So, what is it you can do when it comes to the big brands’ advantage? Well, the first thing to do is to more or less get over it. It was inevitable, it was going to happen whether Google helped or not. So if you can’t beat em, join em!

Step 2 – Fake it Until You Make it

I’s time to take a look and learn from the big brand names. Look, if you focus all of your company’s energy on focusing on a couple on-page situations, and manual link-building, it will be feast and famine by way of algorithm shifts. Big brands are engrained into public consciousness, they are predicated on attacking consumers through a variety of channels. So do not put all of your chips on black. This isn’t roulette.

Unfortunately, you probably don’t have billions of dollars laying around to invest in marketing. However, you may be able to harness the brand awareness your company may already have. If your product is decent, you probably have a following. Go to them, engage, reward, and begin to think beyond getting into the Top 10 rankings. This is where social media comes into play. Don’t just Tweet links, or beg for Likes, build relationships. This is where you need to start looking at the overall health of your brand that exists outside of search results.

Algorithms are always changing. If you rely on Google too heavily, you are potentially leaving your company at the mercy of the unknown. The internet is fluid, if your company has been resting on its laurels, you may be cruising for an algorithmic bruising. It may not be today, or tomorrow, but when it hits, it will happen quickly and mercilessly.

It’s always good to prepare. Make sure that your brand has the ability to off-set possible drop offs from the uncertainty of SEO. Make sure you are using a quality Philadelphia Web Design, get active on social media, try out new tags, as well as on-page plans of attack. While not every one will work, but if and when they do, you will have something that the big brands don’t yet. Agility is your friend, use it, that is something that the big brand can never duplicate.