Why Google it, When you can Spotlight it?

We’ve all heard and used the (what we thought to be) timeless phrase “I don’t know, Google it.” But is that headed out the door?

Earlier this week at the World Wide Developer Conference (WWDC), Apple released more new features to their products. For a while Apple products have all had a feature in their software called “Spotlight.” This feature made it easy for users to search right from their desktop or home screen. For Mac users, simply press the command key and then the space bar. For iPhone users, they just have to drag down on their home screen. Imagine that, getting to a search engine with the touch of a button or the swipe of a finger.

This is great for Apple, but what about Google? In the past few years Google has gone from the most well used search engine to being threatened by a software feature on a cell phone?

Paid inclusion is starting to take over Google’s search results. These are the sneaky ads that appear to be content to most users until they notice the tiny “Ad” symbol next to the result. These ads are paying Google large sums of money, making it hard for Google to turn them down. Consequently, your search results are becoming less and less what you want to find and more and more of what Google is getting paid to show you.

Spotlight searches, on the other hand, show no ads at all and the searches are tailored specifically to your needs. ‘Maps’ will show you where you can go that is close in proximity to your location. If you search for ‘picture frames’ and have the Amazon app on your phone, it could take you directly to picture frames that you could purchase on Amazon within the app. This is a result of the deep linking that Apple implemented, which was announced at the World Wide Developer Conference (WWDC), this past week. 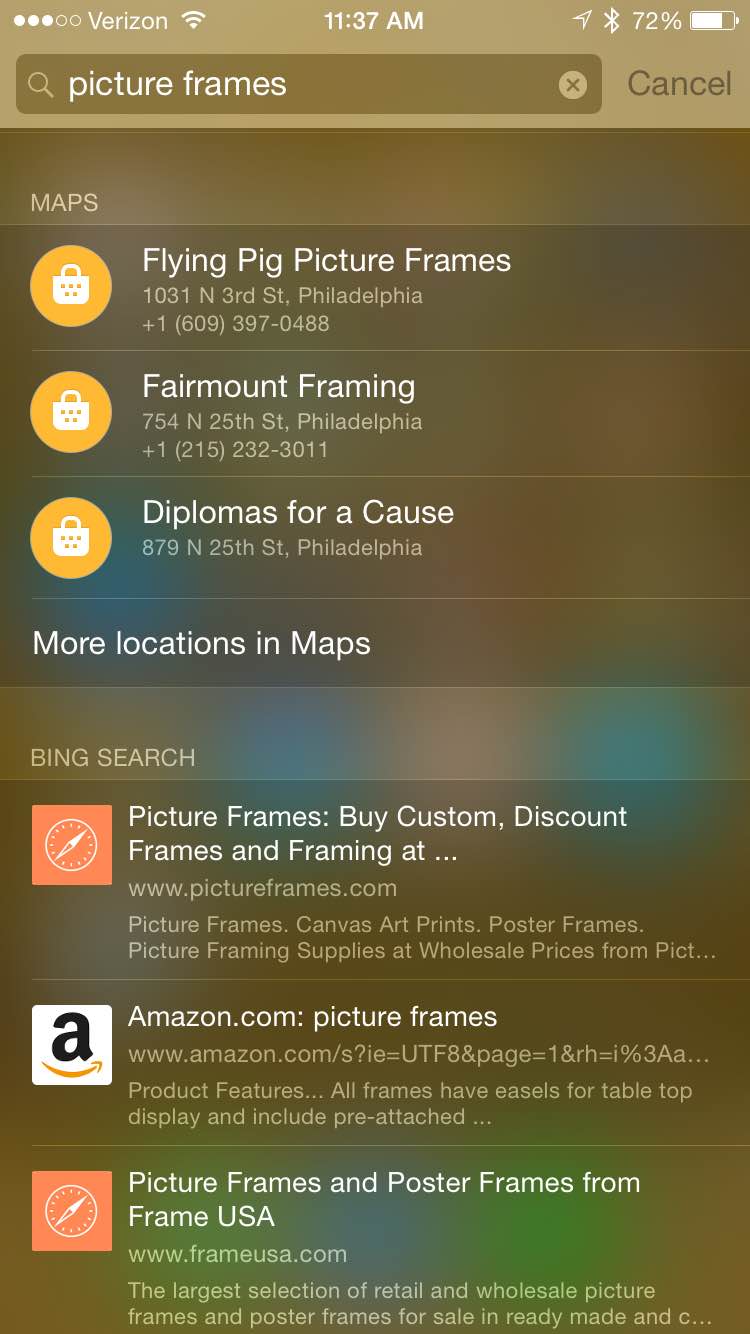 When you do a Google search on the other hand, the results are much different. Look at the first three results shown. They are all posted as ads. All of that looks like normal content but is in fact an ad.

In June of 2014 when the iOS 8 and Yosemite updates were released, Spotlight got an update as well. Apple traded Google in for Bing, making Bing their primary search engine. The newest idea, suggested by Jason Calacanis, is that Apple makes a move to buy DuckDuckGo to further improve their search results. As we can see below, the results from DuckDuckGo feature only one ad, and show product results as well.

Buying out DuckDuckGo could be the next huge progressive step that Apple would take. Combining the results from Bing, DuckDuckGo and Spotlight will give consumers more options and less advertisements. In terms of Google, some may think their value may be heading towards a decline.

Being a self-proclaimed Apple enthusiast, I have been using Spotlight searches for quite some time. Why spend my time scrolling through ads that I don’t particularly want to see, when I could use Spotlight to give me the exact results that I am looking for. Not only are they the results that I want but they are also much more easily accessible because Spotlight connects them through the apps on my phone or on my laptop.

By broadening Spotlight searches even more by tacking on DuckDuckGo’s web search, I think that the number of Spotlight users will increase significantly, eventually leaving Google somewhat behind in the Internet dust.

Of course there are those that would argue that Google’s search engine would continue to reign supreme by having the most accurate search results. Would users sacrifice accuracy simply to see fewer ads or would they continue to put up with ads if they still believed that Google’s results were better than all other search engines? People are annoyed by ads, yes, but their ultimate goal is to find the right answers as quickly as possible. If Google can continue to provide this then they will remain on top, but if Spotlight comes anywhere close to as accurate then it would be in an excellent position to top Google once and for all.

What do you think? Will Spotlight take over the search engine throne or will Google evolve to stay in power? Please share your thoughts in the comments section below!